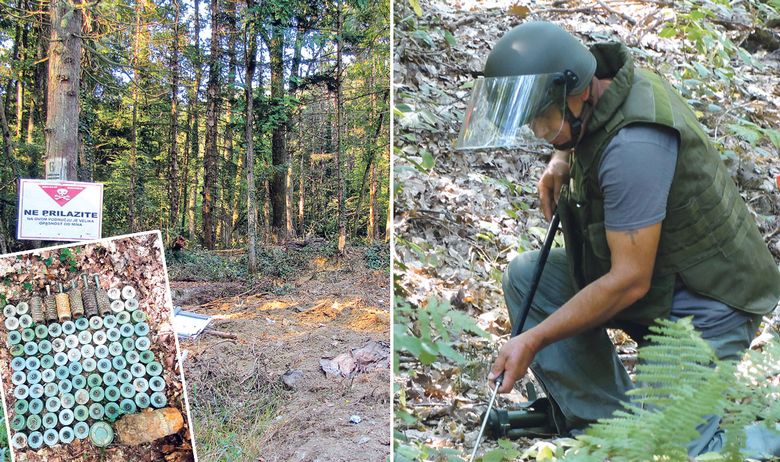 Posted at 13:45h in News by Lana Zadravec

The demining of 1,8 km2 of Kotar forest in the Sisak-Moslavina county begun on 13th of August within Swiss-Croatian Cooperation Programme. Above mentioned area represents one of the largest mine suspected areas in the Republic of Croatia and through this project safety and security of the local population will be improved.

The amount of the Contract is HRK 18,9 million and through this contract 250 demines have been engaged to carry out demining operations.
In the first two weeks of works, deminers cleared 1,2 km2 of mine suspected area and fund more than 600 mines. Eventually, It is estimated that a total of about 1700 mines will be found in this area by the end of September 2018 when physical demining of the mine suspected area is planned to be finished. By comparison, the same amount of the mine was fund and destroyed on the entire territory of Croatia throughout the whole last year.
Through the second component of project, the socio-economic empowerment of mine victims will be performed which will help to increase employability and competitiveness of mine victims in the labour market.
It should be noted that the total value of project is more than 24million kuna and it is implemented by the Croatian Mine Act Centre as the Executing Agency and the Government Office for Demining as Intermediate Body.

We use cookies on our website to give you the most relevant experience by remembering your preferences and repeat visits. By clicking “Accept All”, you consent to the use of ALL the cookies. However, you may visit "Cookie Settings" to provide a controlled consent.
Cookie SettingsAccept All
Manage consent

This website uses cookies to improve your experience while you navigate through the website. Out of these, the cookies that are categorized as necessary are stored on your browser as they are essential for the working of basic functionalities of the website. We also use third-party cookies that help us analyze and understand how you use this website. These cookies will be stored in your browser only with your consent. You also have the option to opt-out of these cookies. But opting out of some of these cookies may affect your browsing experience.
SAVE & ACCEPT